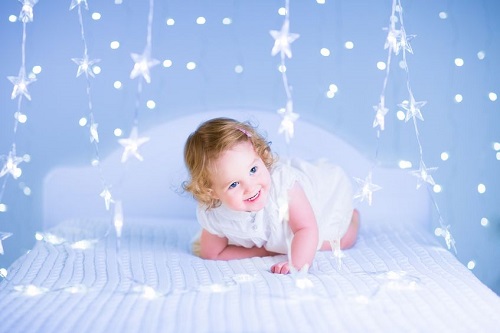 Whether it’s a cold winter night or a warm summer evening, the presence of fairy lights can bring enchantment to the atmosphere of your home. They aren’t just for Christmas! If you’ve ever watched fireflies at night in a meadow or in grove of trees you know the magical feeling they bring. In old European tales carried down through the ages the presence of fairies was always signaled by tiny lights that covered a glen or raced along a mysterious path, and if a person peered into one, they would be sure to see a fairy within. These starry lights soothe the heart and lift the imagination.

In a still famous 1935 film (now on DVD and YouTube) based on Shakespeare’s “Midsummer Night’s Dream,” the bower of the King and Queen of Fairies is filled with scintillating light. The effect was way ahead of its time. It also featured ballet sequences by Bronislava Nijinska, music by Felix Mendelssohn and Erich Wolfgang Korngold, and starred Olivia de Havilland, James Cagney, and Mickey Rooney in a tour de force as Puck. But it is the fairy lights that dazzle and linger long after the film is done.

Why not create such a feeling in your own environment? Here are just a few of the ways you can transform a room with light.

One method interior designers use and which is easy to do yourself is to add fairy lights to a crystal vase and then have them climb up decorative branches with flowers or berries or just on their own high above the edge of the vase. Just be sure the wiring is white and not black or green to get the best effect.

Is there a room that’s connected to a dark hallway? Surround the threshold and frame of the door with fairy lights and let some of them cascade onto a table in the darkened area. In seconds you have a welcoming alcove.

No matter if your bathroom is small or large, stringing fairy lights along the wall edges or windowsill, around the bathroom mirror, or along the back of a vanity table invites the feeling of well-being. Add in aromatherapy, a bubble bath and your favorite music, and time will drift away, along with all your stress.

4. Lighting Up a Bookshelf

Weave lights along a bookshelf, winding the long strand among the books. Move down the shelves one-by-one, leaving a few lights on each until the strand is used up. This arrangement is easy to change so that you can revisit your arrangement when the mood strikes you. It may also bring enough light into the room to read by.

5. Light as a Centerpiece

A simple adornment for a dining table could be a glass bowl in a color you like filled with fairy lights. The lights reflect off the faces of those gathered together. This heightens people’s enjoyment of the meal and each other’s company, not unlike being in a cozy restaurant.

This next recommendation may sound off the wall, but it is guaranteed to lift your spirits if you’re feeling low… Drape a few strands of fairy lights around your shoulders while you watch a show or read or work on your computer. See how you feel after a few minutes. You’ll be surprised…

Place several long strands of fairy lights behind a translucent curtain so they hang down from the rod to the floor. Even in the daytime there is a diaphanous effect.

If you have a chandelier with just a few lamp bulbs in it, wind strands of fairy lights around and through the sections of the lamp. The effect brightens the whole room and makes your chandelier a centerpiece.

9. A Garden Bower of Light

In a garden, whether it is on a balcony or in a back yard, you can set out strands of fairy lights and weave them among the railings or through trellis slats or hang them from low tree branches. Like the 1935 movie, you now have your own magical world to inhabit.

Small paper lanterns make wonderful covers for the fairy lights and you can create all kinds of moods and themes for any occasion with them. Artificial flowers work well for this, too.

Choose one of these methods and leave the lights on for a few hours. When you shut them off at last, it feels as if something is missing! That’s the effect they can have.

More: 10 Benefits of Using Feng Shui to Design Your Home

The beauty of fairy lights has something to do with their unobtrusive size, with the myriad of reflections they send out, and with the feeling of peacefulness they can inspire. In our rushed lives, moments of stillness can be powerful.

Do you already use fairy lights as part of your décor? If not, do ideas come to you now about how you can enhance your living space? Let us know in the comments, for sure.

9 Beneficial Uses of Blue Glass in the Home